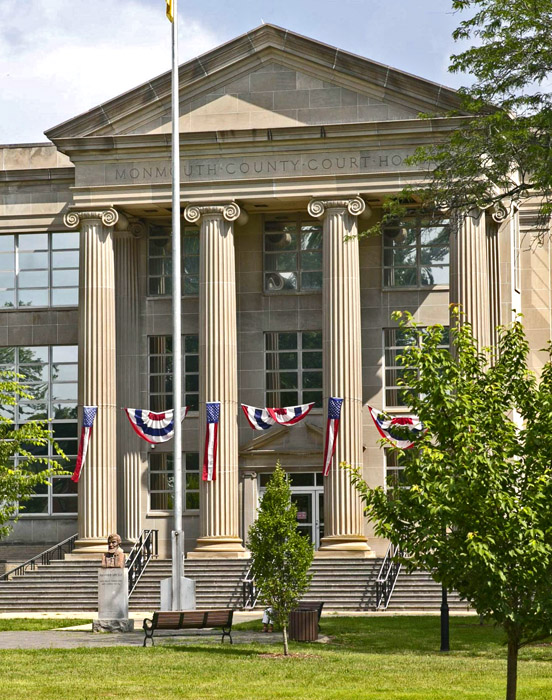 Founded in 1908 to assist attorneys and the public in Monmouth County.  Twenty years ago the association had 300 members and, as of today is made up of 1,300 members.

The Monmouth Bar Association celebrated its 100th Anniversary on January 8, 2008.  We have a long and distinguished history and are proud to commence our second century of service to attorneys, the judiciary and the public.

On the recommendation of the late Hon. M. Raymond McGowan, then President of the Bar Association, the Officers and Trustees incorporated the Monmouth Bar Foundation on June 16, 1964 as a Not for Profit Corporation under Title 15 of the Revised Statutes of New Jersey.  The Foundation was created to award scholarship to deserving law students from Monmouth County as well as various other educational and chartiable purposes as envisioned by lawful activities of the Not for Profit Corporation.  In order to achieve funding for this Foundation, the members of the Association would be asked to contribute a donation ($25.00) annually.

In 1980 the Foundation established it first named scholarship – the Stewart B. Sawyer Scholarship Award.  This award was funded by gifts from individuals seeking to preserve the memory of Stewart B. Sawyer, the deceased son of former Bar Association President Sidney I. Sawyer.

On September 13, 1985 Thomas D. Nary, a member of the Bar Association, died.  Under the terms of a trust he established in 1964, the principal of the Trust ($170,000) was payable to the Foundation.
The President of the Monmouth Bar Foundation at the time of Mr. Nary’s generous donation was the late John C. Manna who unfortunately, passed away February 26, 1997.  Following Mr. Manna’s demise, Peter W. Kenny assumed the role of President until 2018.  The current President is Thomas J. Smith, III.  Mr.  Smith  along with the Officers and Trustees of the Foundation members meet several times a year.

The Foundation has awarded hundreds of scholarships (many of the recipients are current members of the Association), has helped support the Legal Aid Society and has done what it can to help the Association in other educational and charitable areas.

The Association members are an important source of funds by making voluntary contributions when paying their dues.  Additional numerous “Named Scholarships” have been established by those who wish to recognize a family member, lawyer living or deceased by contributing a minimum of $10,000. Currently there are twenty (20) “Named Scholarships.”

OFFICERS OF THE FOUNDATION

TRUSTEES OF THE FOUNDATION